On January 16, a delegation from the Basque Government participated in a trade and institutional mission to China, where members met with Basque companies operating in the Asian company, among them, Fagor Automation.

During the five-day visit, the delegation held meetings with the local government in the region of Jiangsu, as well as the chamber of commerce in this area, the largest in China, with more than 170,000 member companies. 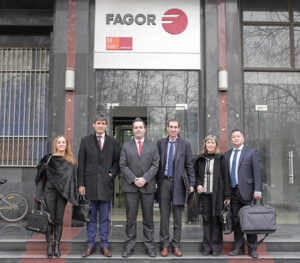 The delegation, led by the Deputy Secretary of Industry from the Department of Economic Development and Infrastructures, Javier Zarraonandia, Director of Internationalization, Ainhoa Ondarzabal and General Director of the SPRI Group (the Basque business agency under the Department of Economic Development and Infrastructures), Alexander Arriola, met in Beijing with Fagor Automation and the Basque renewable energies company, Gamesa. A round table discussion was held during this session with the Basque companies Fagor Automation, Gamesa, Iraeta and Hine.

China is currently host to 133 Basque companies with a presence in China and the administrative regions of Hong Kong and Taiwan, which have established 222 production and/or commercial operations in the country. The large majority are located on the eastern coast of the country, particularly in Shanghai and Jiangsu. Almost half of the companies in operation belong to the machinery and mechanical equipment sector.

The Basque Government, through the SPRI Group, already visited the Asian country in September 2015 to contact Basque companies and sign an agreement with the Jiangsu Chamber of Commerce. Then, like now, the aim was to see first-hand the situation of Basque companies operating in the country, analyze their situation after the changes deriving from the economic situation in the country and to continue to develop institutional relations between Euskadi and China.