The kick-off meeting of the European project ‘JRP SIB58 – Angle metrology’ was held on September 17th, 18th and 19th. That meeting took place in the facilities of the Technological Center Tekniker in Eibar (Spain) and ended with a visit to Fagor Automation facilities in Eskoriatza (also in Spain), linear and angular encoders manufacturing plant. Visitors were very interested in this visit because these products are crucial in many tasks carried out in metrology centers. 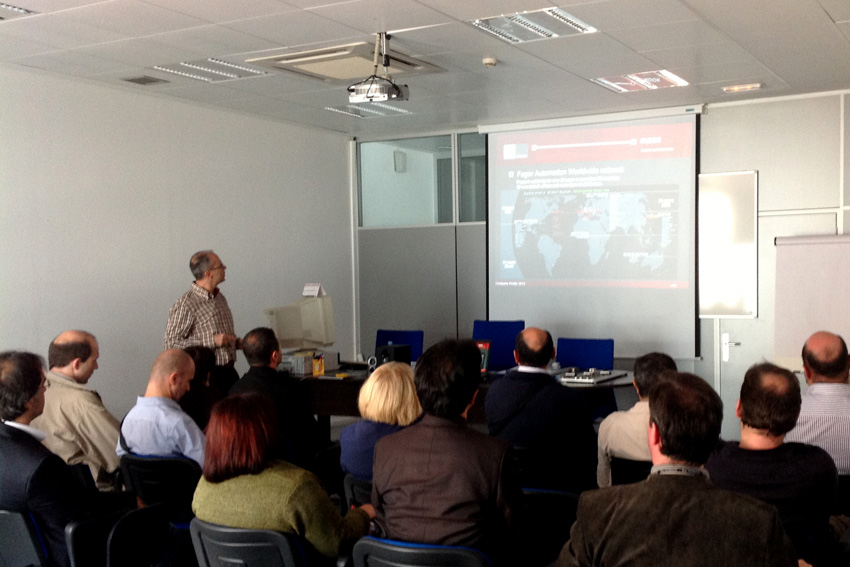 Fagor Automation, faithful to their commitment to the permanent improvement of the features they offer to their customers is cooperating in ‘JRP SIB58 – Angle metrology’ project of the European Metrology Research Project (EMRP). The Joint Research Projects are financed by the European Community and are the landmark of basic research for future technological developments. This project has been designed and developed by the main European Metrology Centers with the additional cooperation of the Japanese center (NMIJ) and the Korean center (KRISS).

Metrology, Measurement Science, is the backbone of our high technology world. What we can’t measure we can’t properly comprehend and we can neither control it nor manufacture it reliably.

This project tries, through research and experimental work, to go beyond the current state of the art; tries to develop devices to make the ‘radian’, the angular unit of the SI, with an expanded uncertainty of less than 0.01 arc seconds (50 nrad). This work ensures reliability and traceability with respect of the SI of angular measurement in industrial and scientific applications.

Fagor Automation, will participate in this project thanks to its known track record as a European manufacturer of high accuracy angular encoders and it is the only representative of this sector in the consortium . As an active participant, it will offer its knowledge on developing more accurate angular encoders as well as about industrial problems encountered in measurements made with this type of devices.