Fagor Automation has created Equipment for angular patterns with a precision of up to 10 nanoradians.

Fagor Automation has positioned itself on the cutting edge of the nanometric precision measurement market with state of the art solutions.

The progress made has been developed by the construction of a machine that measures angular patterns and thus ensures «Precise measurements with nanometric repeatability» within the machines sensors. 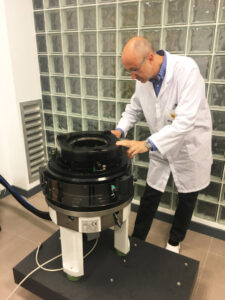 Fagor Automation, through it’s Fagor Aotek Technology Center, has successfully culminated the design and construction of a machine to measure angular patterns on a nano scale. The Project, carried out in collaboration with IK4-Tekniker and with the backing of the Guipuzcoa provincial council, has successfully produced one of the first machines in the world with «International system traceability» making it a benchmark for pattern measurement and mass produced Angular sensors. In this same line of work, Fagor is collaborating on the «Angles Project with National European Metrological centers, as well as Japanese and Korean centers, in order to engage in a cross-comparison. This consolidates their role as an International metrology leader in this industrial segment.

For Fagor Automation, the measurement element must guarantee «Ten times the precision of the object being measured» which has led them to enter the scales nanometers and picometers. In fact, the machine measures, passing from the angular (second arch) to the linear (nanometer) scale, distances as small as «0.8 nanometers, which eliminates the uncertainty in 8 nanometer

measurements». It is interesting to note, that 0.8 nanometers is approximately half the size of a water molecule.

The company’s next challenges lie in replicating the model for linear patterns and encoders and achieving repeat measurements of as little as 2 nanometers. The Fourth industrial revolution is popularity linked to the connectivity of machines and factories, but ensuring precision on a nanometric scale is an element that is just as crucial to ensure progress with guarantees towards the industrialization of «nano» elements and equipment, to support the change in this era within the science, aerospace, ICT and automotive industries, among many others.

Fagor Automation is one of only two European companies participating in the «JRP 58 Angles Project», which focuses its action on «remeasuring the radian» with an improved uncertainty of less than 0.01 arch seconds.