Thanks to this collaboration agreement, MONDRAGON University – Mexico and Fagor Automation will promote specific training in the field of numeric control starting the next academic year.

MONDRAGON Educación Internacional (MEi) was created in 2010, as the product of the alliance between Mondragon Unibertsitatea and Alecop S. Coop. Its mission within the MONDRAGON Corporation is clear: to promote and manage higher education centers, based on the knowledge accumulated by all the Corporation’s training and educational institutions. 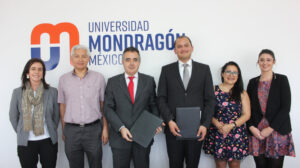 In 2011, the MONDRAGON Corporation acquired UCO University in Queretaro, integrating it into the MONDRAGON Educación Internacional (MEI) network, which also has professional schools in Colombia and Saudi Arabia. MEi has 70 years of experience in educational services focused on people, the community and solidarity.

Currently, MONDRAGON University – Mexico offers 15 professional degrees and 8 Master’s programs and is located within one of the best private universities in the country, backed by the Federation of Mexican Private Higher Education Institutions (FIMPES), which includes only 2.5% of the for-profit professional schools in the country.

The University is located in the same area as most of MONDRAGON’s cooperatives in Queretaro, and so the agreement will promote even closer relations between companies and the university, and cooperation among all of them. 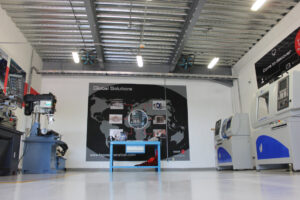 Representatives of the Mexican government also participated in the inauguration of this space, in addition to Fagor Automation and the university itself. Rafa Aranzabal, Sales Manager for Fagor Automation, stressed the value of the collaboration agreement and cooperation among the different training centers and cooperatives. “This classroom is set up with next generation numeric control machinery and also favors close connections with the rest of the companies in the area. This way, students will work with the help of professionals and will learn to use our controls.”

The classroom will offer visits for customers of Fagor Automation Mexico, and in addition to student internships, it will also offer training services for students, companies and others interested in the most advanced numeric control systems, Aranzabal indicated.

UMx Dean Arturo Alvarado Hierro stated that the inauguration of these spaces complements the top-level academic training of its students. “It is an example of one of the most important values at UMx, collaboration, in which companies decide to make an investment in order to generate alternatives for the young people of Queretaro and professionals in training,” the Dean stressed.

This strategic alliance between MONDRAGON University – Mexico, the company Fagor Automation Mexico and the savings and loan Caja Inmaculada, Sociedad Cooperativa de Ahorro y Préstamo will benefit students majoring in Financial Administration and Finance, and in the case of the Fagor Classroom, those studying Mechatronics and Industrial Engineering, the dean explained.